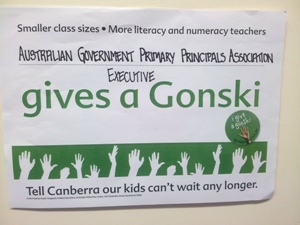 AGPPA Demands that the Gonski Funding Model is implemented for the good of all government primary school children.

Over 5500 Government Primary School leaders representing 1.4 million government primary school students reject the position of Christopher Pyne, Shadow Minister for Education in relation to his comments about the implementation of the Gonski model.

Click here to view a video of Gabrielle Leigh, AGPPA President, speaking about the AGPPA position on the Gonski review report.

AGPPA strongly supports the model proposed by David Gonski and believes that Australia needs a single per capita funding model with needs based loading. AGPPA has accepted the challenge led by David Gonski to continue the education debate about the Schooling Resource Standard and opposes Christopher Pyne’s comments that the model would be dismantled under a Liberal Government.

“The formative years of primary schooling where all Australian children acquire the academic and social foundations for success in later life must be acknowledged by the model”, said AGPPA President, Gabrielle Leigh.

The new model requires an appropriate investment to challenge the out-dated, historically scripted models of resource allocation currently in place. It is pleasing to see that a number of State Governments and politicians have openly supported the Gonski model.

“AGPPA is counting on all politicians to get behind the Gonski model to create a better future for our children,” said Ms Leigh.

Our 2021 – 2024 Strategic Plan highlights how we will achieve our purpose of influencing national efforts to drive quality leadership for every government primary school.